Version 17 of Advanced REST Client has been released. You can install it from ARC's releases page.

This release was focused on consolidating so far distributed code-base. We have merged most of the existing libraries into 4 main repositories. This allows us to focus on building new features instead of compatibility between the libraries.

Besides the great consolidation, this version comes with several new features, bug fixes, and general improvements.

Fixes
We hope you will love this version. Please, give us your feedback on the project's GitHub page.
- February 01, 2022 1 comment:

Email ThisBlogThis!Share to TwitterShare to FacebookShare to Pinterest
Labels: release

The future of ARC projects

In the discussion “Redesign data storage - removal of Saved requests”, I proposed ending of “saved” requests in the Advanced REST Client, moving all existing “saved” requests to a “default” project, and redesigning what a project is. I was unclear how to evolve this functionality back then, but today the path is clear. This post explains the way forward for ARC projects and the invitation for open discussion before finalizing the spec and turning it into a code.

Recently we released version 17 (beta) of the Advanced REST Client. In it few changes were requested for a very long time, so we are delighted that they will soon be available in the stable channel.

This fixes #304 which is a long running effort to upgrade application logic and UI.

You can try the new application by cloning this repository and checking out the `redesing2020` branch. Then installed dependencies (`npm i`) and start the application (`npm start`).

From the user perspective this release comes with complete redesign of the UI: new navigation and workspace that support different types of editors (not only HTTP editor). In the future this redesign will allow us to introduce new functionality to the application, like support for Protocol Buffers, GraphQL queries, or structural API testing capabilities. This wasn't possible with the previous application and information architecture.

We are also working on a new documentation for the application that includes video tutorials, and

Below is the complete change log for the v16 release for the end-user.

You can try the next version of the application today by downloading the alpha version. But, please, note that alpha version is not targeted for production. It hasn't been tested in the field and may contain undetected issues. If you find an issue, please, report it on the project's GitHub page, or by using application's "help" menu. 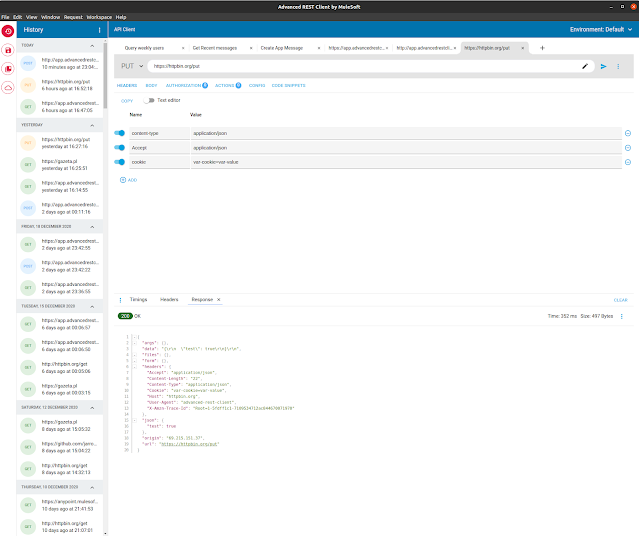 Version 15 of Advanced REST Client has been released. You can install it from ARC releases page.

ARC's sister project, API Console - the API documentation tool, is now published with version number 6. It brings tons of changes and improvements. You can use API Console to document your APIs using API definition. Read more to learn about changes and features of API Console.

Version 14 of Advanced Rest Client has been released. You can install it from ARC releases page.

This release comes with complete rewrite of code base and few new features. Read more for a full list of changes.